A packed event and a very interesting discussion - many thanks to event sponsors Canonical, who also bought along some devices so we all had a good play with Ubuntu phone and tablet editions!

Huge thanks to our chair and panel and of course volunteers, photographers and also Adam Cohen Rose, @adamcohenrose: this is an edited version of his blog post about what went on!

Some really useful insights this week — with the panel providing a different perspective on the mobile industry than the usual. Although one question started on the HTML vs Native war, this was quickly knocked on the head and left for a future Mobile Monday.

There were three items on the agenda: An introduction by Victor Palau; Principal conclusions from Developer Economics 2013 (the full report at http://www.developereconomics.com/reports/q3-2013/), by Andreas Constantinou; and a panel discussion featuring:


Thanks to Geoff for being an excellent chair and keeping the discussion moving fluidly, and to all the panel members and organisers for a great evening.

What do new platforms offer manufacturers?
GB: essentially just 2 OEMs (Apple, Samsung) making any profit
CH: not a problem of distribution but where it is going
-producing lots of phones in saturated market
-Mozilla’s job is to keep the web open
-the web is worldwide
-FirefoxOS is targeting markets that mostly have featurephones, aiming to be people’s first smartphone
-you can get old Androids but they’re 4 generations behind with old browsers that don’t show stuff right
-manufacturers actually quite interested in this proposition
-Foxconn hiring 3,000 people to make a FirefoxOS tablet
-Samsung & Apple neutering open web — you need expensive hardware and a credit card to be a part of it
-in Spain selling €79 phone with €30 pre-paid credit
GB: open initiatives have failed in the past: WAC, etc
VP: open initiatives can have trouble with leadership
-Canonical remain open but have strong leadership
-offering operators ability to showcase their content
DW: two good cases for disruption
-companies that have shown their staying power
-just an improvement in battery life would be welcomed…
-smartphones naturally get stretched as new environments come along — and leave space for niches

What about the ecosystem?
AC: for any platform to be successful need buy in from:
-developers, operators, manufacturers, users, …
-devs have to learn new platform
-users don’t care what’s underneath
-operators have pre-allocated slots, often by OS
CH: Windows Phone is a great example
-not seen the depth of commitment required from the operators
-not willing to take the risk
AS: not all operators subsidise handsets
-when a new version of the iPhone comes out, AT&T’s share price drops as they have to subsidise it
-need an alternative
-different operators placing different bets
AS: operators want to get their content onto devices
-but are struggling to do so with iOS & Android. (Ed.: this is probably one reason why those two are doing so well!)
CH: app discovery as easy as searching
-search for a movie: get IMDB deep link
-go back to search and long-press to install app
-then get offline goodness etc
-drives me crazy that I have to wait 5 months for a game my friend is playing on his different device

What about the corporate sector or 3rd sector (training & education)?
VP: one of our main focuses at Ubuntu
-have a very secure platform, bringing to phone
-converged device — plug in your phone and get full desktop
-good for enterprise: single device, secure
CH: enterprise difficult to get into as wedded to Blackberry or other platform that’s integrated with email system
-difficult sell for open source
-3rd sector is an easier sell
-e.g. simplified phone for elderly: just photos of family — click to call
AC: changing the UI of the phone reminded me of SavaJe (way back in 2006, bought and swallowed by Sun)
-html5 is top platform for enterprise
-top driver is efficiency
CH: developer scarcity — don’t have to go out to an agency
-just use existing web team
DW: enterprise can drive home usage too
-LinkedIn most popular enterprise app?
-switched back to native on mobile as tools were not good enough
AC: html5 apps are like a car without a break
-once it starts leaking, you can’t stop it

Are you seeing apps migrating from mobile to desktop?
DW: more about device usage — consumer behaviour is leading
VP: end of Windows XP support is great: making people think about it
-at the moment can’t replace them with an html5 app
-but solutions available in Ubuntu
AC: crawled the Google store to find APIs used
-only 1 in 4 Android apps could be done on straight web
CH: that’s why Firefox provides access to device
-some memory leaks come from platforms they are using to generate code
-Chrome and Firefox dev tools making great strides

How many years are going to pass before clients say “don’t do native”?
VP: has to be lots more about what’s good for consumer
-depends on the situation and who you’re aiming it at
AC: it’s not an either or…

Privacy: number one for Mozilla / chinese walls between work & home
AS: virtualisation of phones available: multiple phones in one
-lots of companies don’t use Dropbox for security reasons
-don’t think about all the data that certain closed OSes are capturing about us
DW: trustworthy and transparency may be change reasons
CH: already seeing that for Firefox browser
-sometimes have to make the UX harder to make people think about what they are doing
VP: full Linux implementation
GB: isn’t there an argument that deep integration with Google is part of Android’s success?
AC: people don’t ask if Facebook & Google are spying on them: they give you something back which you perceive to be of value
CH: it’s actually more addiction than value…

What positive reasons for getting new platforms?
AS: it comes down to competition
-Is it a good idea for just a few companies to make the profits?
-I represent people who used to make the profits from the industry…
-was previously director of WAC, but by the time it was ready there was no need for it as only two platforms to develop for
-operators want to implement RCS/joyn (operator-based IP messaging, voice, video, etc) and new platforms give them the chance to get involved
DW: so many variations
-e.g. Nokia mega pixel camera: “average user only cares 16/23 about camera pixels” — but actually there’s a reasonable niche here

What about the important services that users expect?
-e.g. Skype, Google Maps
-AS: was in Korea last week: their search provider is being investigated for monopolistic practices
-also a messaging provider was worried about operators implementing RCS/joyn and taking away their revenue stream
-CH: service in China to add “written on an iPad” to the bottom of your email
-$5 a month, and they stole your email data! 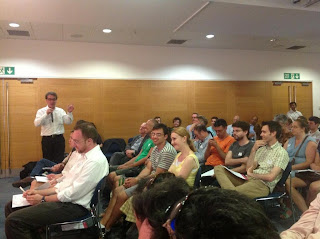 Who is likely to nudge sub-saharan Africa into smartphones
-full of featurephones
-OLPC not doing that well
CH: OLPC didn’t do so well as missing network connectivity
-Ushahidi is building a wireless BRCK to be a modem for Africa
-if someone asks “what if Google or Apple go after these markets after you”, answer is “then we’ve won!”

Visiting from Momolo Nigeria: what difference will a billion users in Africa have on design considerations?
-120million mobile phones, mainly featurephones
CH: sent UX designers to South America to come up with use cases
-build apps with Telefonica targeted at those markets
-need to meet somebody local who knows the area
-can’t assume that everybody wants the same thing
VP: community is very important
a lot of people in Africa want to contribute and make things better for their community
-have a whole set of local community councils
-e.g. large Catalonian community
AC: if you need to access the internet you need a data plan
-developing countries have very expensive access plans
-need to have smarter ways of micro-access to the internet
DW: designing meaningful UI for people who can’t read or write
AS: some operators already doing micro data plans
-e.g. facebook access not coming out of data plan (facebook zero)

Closing remarks
GB: often on West Coast of US, it’s Android, iOS or the highway
- been impressed that there’s a great strength in the alternatives
- barriers to entry getting lower
- html5 provides common access
- market driven by growing diversity
- fragmentation in OS space is likely to proliferate
AC: there is no black or white
- there’s always multiple alternatives
AS: there’s a definite need & opportunity
- don’t know who is going to win
DW: which David will survive?
- execution: can the company keep pushing out high quality?
- proposition: will people bit?
- community: can they start a virtuous cycle?
VP: can you get a consumer to buy something different?
CH: there’ll be a lot of opportunity for a lot of players
- we were the only cool thing in MWC twice in one day
- device should not spy on you: built the internet in a different idea and this should exist on mobile phones too