So the UK nominees going through to the 2nd round for Vodafone Mobile Clicks 2010 have been announced, with 20 mobile start-up companies selected from the UK, Spain, The Netherlands and Portugal vying for final prize money, a total of 150K Euros. We caught up with a few of the UK companies who have made the cut, to share in their excitement about being nominated.

The UK finalists include Little World Gifts, Milestone Planner, Movirtu, Roulette Cricket and Touchnote Postcards, who will learn on Monday 13 September which one of them has made it to the final round of the competition, and will attend PICNIC, where they’ll have their chance to pitch to win the cash prizes. We wanted to know a little more about the UK finalists, and to hear why they want to win and what they would do with the money, here’s what some of them had to say: Katie Lips from Little World Gifts explained that they are delivering the world's most amazing 3D interactive virtual gifts on Facebook, iPhone & iPad. Little World Gifts is a dynamic UK based start-up that is recognised as having a game changing approach to virtual goods - namely that it harnesses mobile and web platforms together to deliver an engaging user experience that brands want to be part of.

“Our big idea is to transform virtual goods - to make them really exciting for users and for brands by harnessing the best mobile platforms. Winning would mean recognition that we're already doing cool stuff in this area; and it would help us to improve our platform and deliver mobile virtual goods for more partners,” she said.

And what about the money the winner gets? She said:

“We're serious about growing our business and we have the vision, the plan and the team to do just that. But we do need capital to help us grow to the next stage. We've already had seed investment from Vision and Media which has enabled us to build a first prototype, attract our first clients and prove the model. We made a small amount of seed funding go a long long way. We're very excited about our future plans and winning a prize in Vodafone Mobile Clicks would help us realise those goals sooner. “ 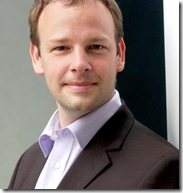 Benjamin Ellis of Social Optic, the company behind Milestone Planner, describes the product as being an on-line collaborative planning application that acts as the project manager for mobile, distributed teams. It allows highly collaborative, real-time planning via a mobile or desktop web interface, so that project team members can check and update project milestones and tasks on the go. Stuck waiting for a plane? 5 minutes in between meetings? Team members can update the plans they are involved with, catch up with the latest changes in real-time, all from their mobile. Milestone Planner can also synchronise project dates to team members' calendars, track project changes, and automatically generate progress reports. It keeps everything on track and everyone up to date, and making life more pleasant and productive for mobile workers, wherever they are.

“Our idea is a simple one: Every business needs to work to a plan, even if that plan changes every day - and it often does in today's dynamic markets. Everyone one in the business needs to be working to the same version of the plan, with the ability to communicate changes and progress in real time. That's the problem we solve today with Milestone Planner,” he said. For the prize money? “We'd use it to accelerate our development, expand our charities support program, and speed the growth of Milestone Planner into the rest of Europe and beyond. Even more than that, the Vodafone Mobile Clicks competition is the largest and most significant of it's kind and would bring Milestone Planner to the global stage and validate our success to date. We'd love to get through to the next round, to be inspired by the speakers and attendees at PICNIC, and compete alongside Europe's best mobile start ups.”

Raam Thakrar says that Touchnote Postcards is a startup that helps turn people's photos into real physical picture postcards. It's all about helping people share special moments – it's about sharing photos in a permanent and tangible way. They've got apps on most of the major platforms (Android, Symbian 3rd and 5th, iPhone and soon Windows Phone 7) and have a deal with Sony Ericsson that will see Touchnote on multiple handsets before the end of the year.

The company is excited to be getting recognition from Vodafone that they are actually onto something really interesting, and if they get the money?

“We're looking to extend and polish our offering - we have a lot of interesting ideas on how we can wow the customers and really show off the power of the handsets that we really want to implement!,” Raam said.

Dave Tharp said that RouletteCricket was born from a simple game of guessing where the next boundary will be scored in a game of cricket. And after playing the game for years they thought...there must be an app for that - right? Well when there wasn't they thought they’d build our own, with a generous helping of knowledge, passion and humour from our partners (and Mobile Monday London regulars) Future Platforms down in Brighton.

“Cricket is the first of a number of games the company has on our road-map build to serve up fun and engaging 2nd screen game-play to passionate fans, and while we think we've won already by being shortlisted, if we were lucky enough to win the big prize we would reinvest the money to launch more games into F1, Golf, Baseball & Football.” he said.

So that’s that then. Watch this space to see who gets through to the final.

Posted by Technokitten at Monday, September 06, 2010