STOP PRESS: The competition is now open to entrants from Spain as well as the UK, The Netherlands and Portugal. Closing date remains the same at 22 August 2010.

And it’s bigger and better than last year and Mobile Monday London is very pleased to be supporting this year’s Vodafone Mobile Clicks 2010 competition.

You can read some bits and pieces about last year’s event here and here's some excellent thoughts and advice from last year's runners-up, Woobius, on what they got out of entering the competition. There's also a little video from them you can watch too which is worth a look.

So, back to this year's competition. The aim is to find the best mobile internet start-up across the UK, Portugal, Spain and The Netherlands and reward the winner with Euro 100,000 and the runner-up with Euro 50,000.

The competition opens today and closes on 22nd August at midnight. But please don’t leave your entry until the last minute. All entries need to be completed in English and you do need to adhere to the Terms and Conditions. The actual competition Ts & Cs are only a few pages – the rest of the document relates to the Ts & Cs for Vodafone’s Widget platform which you must also agree to. Yes, it’s a long document, but please give it the once over to make sure you’re happy with it. I’ve read it and I can’t see anything particularly nasty in there, but I’m not an expert on these things, nor am I a lawyer so don’t just take my word for it. [Update: These have been shortened.]

The application form is pretty straight forward but I highly recommend that you take some thought before you fill it in. There is limited space, and limited time for the judges to read and take in what you’re writing, so it means you need to to think through clearly what your proposition is, describe the features but make sure you also state the benefits as these are what make you attractive to customers. All entries are confidential.

You can only enter once and once you’ve entered, you may not amend your entry.

Entry is now open at http://www.vodafonemobileclicks.com/

The 5 judging criteria are:

There are three stages to the contest:

Last year we were able to put three companies through to the final at Picnic. They were Audioboo, Rummble and Woobius. Woobius came third and walked away with a Euro 25,000 prize. And Audioboo and Rummble have both done very well since last year’s contest, both recently raising funds and growing their respective businesses.

We asked all our UK finalists from VMC2009 what they thought of the competition last year and whether or not it was worth entering.

Mark Rock from Audioboo tells us: "Vodafone Mobile Clicks was one of the freshest competitions of 2009. To have a mobile network operator embrace the start-up community in this way was fantastic. The quality of the judging through 3 rounds was excellent, if a little gruelling, And the support & help given all the way through to being taken to Amsterdam to compete in the finals (we didn't win, by the way) was above and beyond the normal competition process. Vodafone Mobile Clicks is worth the effort"

And Andrew Scott from Rummble said: "Vodafone put considerable energy behind the Mobile Clicks competition which definitely contributed to our profile .. it was also a lot of fun!"

Bob Leung, CEO of Woobius tells us 'Vodafone Mobile Clicks helped us take an idea from concept to working prototype, with the assistance of an expert jury, over several rounds. We used the prize money to take the product to market, and now we are working with leading players in the construction industry. We're building them their very own Woobius Eye, that they use to share information live between desktops and mobile phones, between offices and construction sites. It's a great success. The prize money really helped us to advance our idea over our competitors and we urge anyone with a good idea to enter this fantastic competition.'

And here’s a couple of pictures of the Woobius team with their prize cheque. Well done Woobius! 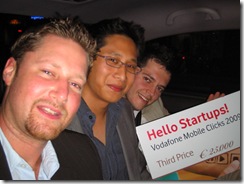 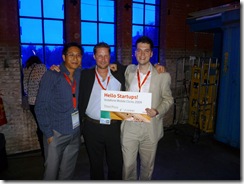 So, get the thinking caps on and get entering. The Mobile Monday London team wishes you the best of luck!

The official press release is below.

The contest is open to any start-up with a great idea for a mobile site, service or application and entrants can compete for the €150,000 prize fund by submitting entries to http://www.vodafonemobileclicks.com/. The competition is open now, and the closing date for entries is midnight, August 22nd, 2010.

Each entry will be judged on five criteria: originality, creativity and innovation; technical and operational feasibility; economic and financial viability; value to end-users; and finally, on the quality of the management team.

The judging will take place over three rounds. Each competing market will draw up a shortlist of their five best local submissions, a winner will be selected from each shortlist and finally all local winners will be invited to represent their country in a live final at the PICNIC Festival in Holland on September 24th, 2010, where the overall winner will be chosen by a panel of mobile industry experts, including Om Malik, founder of the GigaOM Network, Russell Buckley, VP Global Alliances at Admob, and Rudy de Waele, Founder of dotopen, the Mobile Premier Awards and co-founder of the Mobile 2.0 Conferences in San Francisco and Barcelona.

Launched in 2008, Vodafone Mobile Clicks is a Vodafone initiative designed to accelerate innovation in the mobile internet sector across Europe. It is now the biggest mobile start-up competition of its kind.

“Through initiatives like Vodafone Mobile Clicks and our wider developer outreach programme, we’re finding ways to help stimulate, grow and commercialise the innovation that is at the heart of the mobile ecosystem,” said Lee Epting, Director of Content Services at Vodafone Group. “Vodafone Mobile Clicks is really about empowering ambitious, young start-ups to develop their ideas and accelerate them into market. I’m excited to be judging another year of inspiring entries from entrants across Europe.”

Previous Vodafone Mobile Clicks winners include Layar, an Amsterdam-based company who developed an augmented reality service that allows mobile customers to see information on nearby points of interest – for example houses for sale, popular bars and tourist information – by simply looking through a phone’s camera lens. The service launched in June 2009, and throughout 2010 the platform has seen 20% month-on-month growth. Layar has recently announced a strategic partnership with phone manufacturers LG and Samsung.

For further information about the Vodafone Mobile Clicks 2010 competition, or to enter your company, go to: http://www.vodafonemobileclicks.com/