Thanks to ICT KTN for offering such a great opportunity, the judges, finalists and volunteers. Thanks in particular to Meriel Armitage @merielarmitage of The Connected Set for writing this guest post:

On Monday 4th November I was privileged to be invited to be the guest blogger for Mobile Monday's Mobile World Congress competition, so I turned up with a camera, a notepad and lots of interest.

After a few quick chats with entrants, it was straight down to business at 6.30pm sharp. First up was an introduction from ICT KTN. Stuart Revell gave an overview of the competition: we would see 10 companies pitch for up to 4 coveted places at the Mobile World Congress 2014 in Barcelona. Each company would have 3 minutes to pitch, with 4 minutes for questions. So, with no further ado, we were away!

Team 1: My Earth App @RedGlassesApps
Confronted with a huge image of the globe in 3D, giving a real yet astonishing image of the height of mountains and the depths of the oceans, it was hard not to be immediately impressed by Adam Martin's My Earth App.

Essentially, the app itself can turn any image into a 3D object, and can therefore create a new type of image based search, beyond the words and lists that we are used to. It also creates a 3D map of videos around the globe.

It was clear that the opportunities for the software that they have developed are endless. It is, however, currently difficult to narrow that down to something that would enable it to gain mass reach and use.

Here at The Connected Set, we are always interested in prototypes like this as it looks so great, feels fun and is incredibly different from any web based search or video platform currently available. We'd love to look at opportunities for our media or content partners with My Earth App and, crucially,  work out how to get it in the hands of users.

This is a multi platform approach to solving problems within neighbourhoods and communities. Essentially, it uses crowdsourcing technology to enable local people to register improvements that they would like to see in their areas. The council and local companies are able to then see, in real time, what local issues are, and gives them the opportunity to solve them and ask people for feedback quickly.

Changify has a lot of potential to do a lot of good in a lot of communities. They're running a test in Elephant and Castle at the moment, so it will be great to see the results of that- get down there if you want to have a go!

In the CEO Sean Redmond's words, they are 'delivering a step-change in the way that software wireless systems are testing and functionally verified by harnessing the power of randomisation.'

They have developed a way to test wireless systems via systems rather than people, so generating tests that developers won't think of. According to Coveritas, nothing is testing well enough to prevent a big shutdown and they can solve this. Which seemed, to me, like a pretty compelling argument for their place in the market and this competition!

Another crowd sourcing solution to a problem, but this time it's for the increasingly frustrating issues of customer service. It aims to help both the consumer and the organisation by providing a 'lower friction' channel to what's currently available.  Presumably they're talking about the 'you are 23rd in a queue, you're call is important to us' scenario.

CTO, Leon Hardwick, pitched Spatial Buss as a service that could significantly ease pain for utilities & telecommunications providers. As one judge, however, suggested, it's difficult to see how a mobile app would be able to help when a phone network is down! Apparently, though, there is a phone and SMS service available. 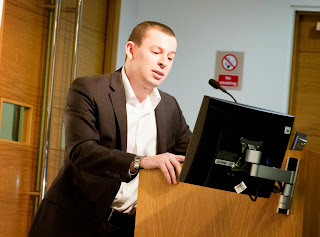 Peachinc's idea sounds almost too simple- a tiny QR code (Morris Code, invented by founder Dr Daniel Morris) that acts as a ticket on your mobile. The reason for its size is so that it can exist in a SMS as well as on a smartphone and still contains just the right amount of information (16 digits) that ticket vendors need. Anything with a camera is able to read this code, and no data connection is needed to get or verify your ticket.

The question was asked, what makes this any different to the existing online or app based ticketing systems that are currently available? Daniel Morris promptly replied 'this one works'. And he has the stats to prove it, they ran an event with Nokia, 5000 attendees with Pechinc tickets and 100% success rate. They've also been being used by the Saudi Football League with very few ticket based issues occurring.

Peachinc readers are currently being built into a big firmware company's newest barcode readers, which means their use will go beyond camera enabled devices.

This is a really smart and simple idea that will have mass appeal to both users and event organisers, and it's difficult to see how it's not the next huge steps towards paperless ticketing, annoying box office queues, and lost ticket nightmares.

It's difficult to explain this one in a blog post. I'm aware that it might sound ridiculous, but it's a touchscreen keyboard that has been reduced into 5 keys. Each key representing a portion of the alphabet. It's a totally new and different approach to QWERTY and takes up 70% less screen room.

I was mesmerised watching Michal Kubacki's live demonstration of 5 Tiles, whilst Piotr Pieczynski talked. As the inventor, Michal has obviously had a lot of practice, but he made it look so easy! Apparently it can be mastered in about 45 minutes, which is something I'd love to test out!

They currently have 500 Google Play users, and apparently no one has reverted back to QWERTY after using 5 Tiles. They are also currently in talks with the RNIB, and I could see that it could be completely life changing for blind touch screen users.

Something clearly needs to change for touchscreen keyboards, and this could be that change. It looks great, seems easy to use, and frees up an awful lot of screen which we currently squint at whilst our thumbs hit the wrong letters on our tiny keys. I can't wait to give it a go and say goodbye to QWERTY! 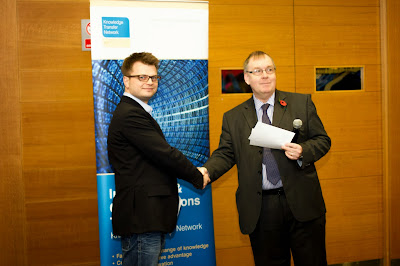 Meaghan Fitzgerald and Ivailo Jordanov walked us through this appealing, simple to use, and beautifully designed way to keep an online family album, with a photo printing and album service available to users. Users own their content and they've already had a huge take up of the service.

With privacy and content ownership concerns bigger than ever, I think 23 Snaps has a bright future with a safe, simple and functional product.

When I hear 'speech assistant technology' I immediately hear Siri's annoying voice saying 'Sorry, I could not understand that.'! So it was with trepidation that I listened to CEO Tony Ballardie introduce his company's capabilities. How wrong I was.

They've cottoned on to the idea that e-commerce is not working on mobile, people don't want to do their shopping on their phones if the effort to type what they want in the search box takes an inordinate amount of time. So, Capito have focussed on solving this problem, enabling people to just say their shopping list instead of typing or searching for it.

Doubt was painted on the brows of almost everyone in the room, but Tony's live example drew a communal gasp of exclamation: it worked! They've also done a lot of testing on accents, vocal variations and background noise to create a seamless user experience.

This software is sure to be snapped up by the grocery big boys to enhance their online shopping experience, which should benefit the end user hugely. Again, this is something that's extremely exciting for us at The Connected Set as speech technology is something that has a lot of opportunities to enhance not only shopping experiences, but also audiences' experience of entertainment. Imagine if your TV could hear you telling Simon Cowell to shut up, and then he actually did!

This is an app for adventurers, ramblers, off-roaders, scavengers, campers, anyone who loves outdoor life really!

The app has everything you'd ever need if you're one of the above: GPS tracking, Ordanance Survey Maps, guidebooks, social networking capabilities, photos and more. It's already had 2 million downloads, has been the number one health & fitness app in Google Play, is used by search and rescue teams in every continent including Antarctica, so it's difficult to see what a place at MWC 2014 would do for Viewfinder.

It was clear, however, that Ben Howard and Craig Wareham have big plans for Viewranger. They are looking into what they can do with wearable devices, partnering with media organisations to syndicate their content, deliver premium services for paying users and brands.

As an outdoor enthusiast myself I can immediately see the appeal of this type of app, and think there's going to be a lot of big opportunities available for them in the future.

This is, again, a very specific solution for developers. A one stop shop for managing apps through one platform, thus reducing the costs associated with deployment and integration.

There's no doubt that this product would ease a lot of pain for developers, development companies and and their clients alike. It would turn app management into something that not just highly trained specialists can do, making the world of apps much more accessible than it currently is, which can't be a bad thing at all!

So, after a whirlwind tour through the bright minds and amazing developments within the mobile world, us lesser beings were treated to some delicious food and a glass of wine (providing a much needed cerebral massage) whilst the judges made up their minds!

After a nail biting wait the competitors were informed who would be going to Barcelona. It was a shame to see anyone miss out, as everyone had put so much work into their brilliant ideas, but, as is the nature of competitions, there had to be some winners. The judges were so impressed that they couldn't limit the winners to 4, so they increased it to 5. The lucky 5 were: Peachinc, 5 Tiles, 23 Snaps, Capito Systems & Viewranger.

A massive well done to the winners, follow them for more news on their progress towards Barcelona and a huge thanks to all the competitors and everyone at Mobile Monday for making it a thoroughly enjoyable and extremely interesting evening!
Posted by Julia Shalet at Friday, November 08, 2013