For the last few years we've been working with UKTI and ICT KTN to stage a competition to win a place on the UK's stand at Mobile World Congress in Barcelona.

We caught up with two of the winners of last October's competition for this year's MWC to see how it all went.

One of the winners was Brian Taylor from PixelPin, who I caught up with at The Mobile Academy Alumni Drinks.  He told me how the stand generated a massive amounts of leads and some Venture Capital interest - rock on Brian and Team!

Brian has been on the Wayra programme, won an ICT KTN bursary place to The Mobile Academy (subsequently paid for a place for another team mate) and is a walking advertisement for a lot of the resources we are going to talk about on 18th March at our Finance, Incubators and Accelerators event (register here).

I also asked James Rosewell of 51degrees.mobi about his experience and he wrote the following:

"Exhibiting on the UKTI (UK Trade and Investment)  stand was the perfect way to exhibit at Mobile World Congress - made all the better by winning the place as part of the Mobile Monday London  competition.

The pod design worked well and the 9 businesses helped each other meet and greet both passing visitors and the large number of attendees specifically visiting the stand.

Having the meeting space immediately above the ground floor exhibition area allowed us to arrange both pre-booked meetings, and also hold impromptu meetings where a more focused conversation was required. The on stand coffee machine was also a super boost, particularly after heavy nights ‘networking’ at the many parties and events in the evening.

The UKTI representatives helped us open doors under the ‘Great Britain’ brand, including one with a Senior Vice President of a large handset vendor which we would otherwise have been unlikely to meet. I’m pleased we worked with them beforehand to raise awareness.

We also met CXOs from target network operators, analyst organisations, and advertising companies who were impressed that we already help 500,000 web sites embrace mobile, and at the depth of our Mobile Analytics product.

I will never forget the look on a certain visitor's face when I showed him how his company compared to competitors when measured by share of web traffic, and then went on to show him which of his handsets were performing better than others.

The hard work now starts turning the 100s of opportunities generated in Barcelona into orders and partnerships..." 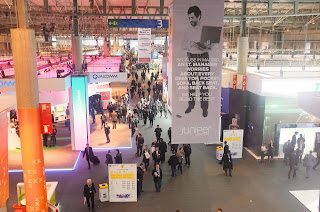 It's great to hear how well this went for James, Brian and teams, and we're thrilled to have played some part helping them on their journey.

We hope to see you on 18th March at our next event or perhaps taking part in our master class The Mobile Academy.  Many thanks to James and Brian for sharing their experience.
Posted by Julia Shalet at Monday, March 11, 2013