We're very grateful to our event sponsor, Keynote DeviceAnywhere our panellists and our superb chair, Ewan MacLeod, @ew4n of Mobile Industry Review, who who set the tone for a highly entertaining and informative debate.

Check out the Web and Native solutions from Keynote DeviceAnywhere linked below.

Thanks to Jake Cassels, @jakecassels, for writing this great account of the HTML5 vs Native debate, held on 24th September 2012 and our panellists:


It’s been more than a year since HTML5 reigned victorious over Native apps at the Mobile Monday debate.  In fact, as Jo Rabin, director, Mobile Monday London, confessed, the topic has been revisited on an annual basis for the last five years.

However, in the fifteen months since the last debate, HTML5 has been scrutinised publicly like no other year before (will anyone mention the F word?). Against this turbulent backdrop, I was keen to deduce from the debate not whether attitudes had changed, but to what extent and why.

Jo Rabin’s motion for the debate placed any advocate of HTML5 firmly on the back foot. Rabin’s preferred metaphor made it sound greasy and cheap:

“This house believes that HTML5, far from being part of Gordon Ramsay’s larder is more likely to be used by Stavros at the corner chippie. Fine if you want chips. Do you aspire to be Gordon or are you content to be Stavros?” 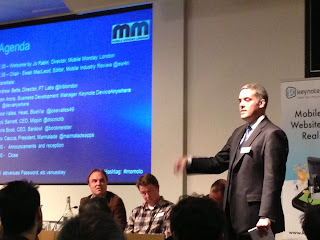 Is hardware now making it harder for HTML5?

Andrew Betts, Director, FT Labs, which publishes the Financial Times HTML5 app, fired out his most powerful arguments for HTML5 up front. These remain unchanged one year on: He maintains that HTML5 truly is the only cross platform solution.  It uses a single codebase.  It provides a much wider reach allowing greater monetisation.

Betts found support from a surprising place: “The web is always going to win” was the cry from Nick Barrett, CEO, Mippin and firm native supporter.  However, Barrett went on to argue that right now with no guaranteed network, closed access to device APIs and cache means that on mobile it’s still not ready.

Alex Caccia, President, Marmalade went further, contending that whilst HTML5 is great on a surface level, the challenge lies in the hardware market.  Because the market is changing faster than ever before, developers bump up against a browser problem, which can’t be solved by logic or reason.  Developers need to get ‘close to the metal’ going native to keep up with this rapid change in firmware.

It’s not only a technology decision

Nick Barrett pulled the debate away from the technology, proposing that developers need to think about their product’s business model and distribution plan before deciding on the technology.   He used the FT’s decision to opt for HTML5 to support his point.  The FT’s well-defined user group and 130 year brand heritage has meant it does not have to rely on an app store for discoverability.  Besides, didn’t the FT simply want to avoid sharing any revenues with Apple?

Andrew Betts, conceded that FT did want to retain the 30% and ongoing 39% subscription revenue that Apple would take.  However, as an additional benefit, the FT now also owns the relationship with its customers.  Native, Betts argued, creates boundaries between the developer and its customers.

But does the FT ask too much from its customers?  Debate moderator, Ewan MacLoed thinks so.  It’s only because it’s the FT that he’s prepared to increase the size of his local cache, following the onerous prompts to achieve it but suspects there are very few instances when he would be happy to do this for other products.

Betts turns MacLeod’s point on its head, contending that HTML5 actually allows users a ‘granular level of permissions’ providing a variety of experiences everything from a straightforward website to a fully integrated application – a far greater experience than being asked to download a separate app from a webpage.  His final point is applauded.  HTML5 is fighting back.

The app store: A mixed blessing

The clearest indicator as to how attitudes have changed in the last fifteen months can be found in the discussions about app store.  In 2011, discoverability was an important consideration when developing natively.  However, with more than 700k iOS apps available, discoverability is now a huge problem whichever route is taken.

One audience member felt that the growing power of app stores has led to developers losing control.  Working with HTML5 provides much needed competition an may prevent developers from becoming hostages of the app store.

In the most heated exchange of the debate, the native champions on the panel likened the app store model to a curated department store retail experience like John Lewis or Debenhams. For many in the room, this is counter to everything that is good about the web.  There should be no boundaries, rules and constraints.

Why are there so few HTML5 banking apps? Banking apps have limited content management requirements and native proponents argue that native offers a greater level of security.  Plus the notifications and personalisation is also a strong benefit of native.

Jose Valles, Head of Blue Via, doesn’t understand why there are so few banking apps either.  He argues that there are the same security issues with desktop online banking as with the use of HTML5.

Does HTML5 solve the problem of needing to develop for a fragmented landscape of browsers and devices?  No, argues Alex Caccia and Chris Book.  It is a myth that you can develop in HTML5 once.  Developers still need to rework for iPhone, iPad and other devices.

“Because you’re not that good at developing HTML5” retorted Andrew Betts.  “What about Facebook?” The question we’ve all been waiting for from the native champions.  Betts argues that Facebook wasted two years on HTML5 because they “didn’t do it well”.

But how does that answer the question about providing for completely different UIs?  Nick Barrett illustrates his point by suggesting that developers might as well develop natively to achieve the UI expectations for devices like Windows phone.  Surely a single HTML5 app would stick out?

The FT has developed a brand UI as opposed to a platform UI to counter this, Betts reveals.  That means what is designed is not specific to Metro or iOS and is what readers expect from the FT having read the paper for years.

Different modes of use

Betts believes HTML5 allows a far broader and ambitious scope in modes of use and is not as constrained as native is. Using this single web technology with a single code base Betts is convinced HTML5 can adapt well to different modes of use. “With HTML5 we can talk about TV, kiosks and billboards” he claims going on to mention a hack day that allowed developers to use Kinect gestural technology to control the FT.

Caccia rushes to defend native apps suggesting they can also be used on different devices but with a much greater control on what the app looks like.  In fact, Caccia uses gaming as an example where native offers a far better experience than HMTL5. The HTML5 promise is only delivered for a narrow band of applications.

An audience member goes further asking whether HTML5 has actually destroyed usability?  The panel are delighted with the opportunity to discuss maps to demonstrate both sides of the argument.  Google Maps mobile web service is used an example of being inferior to a native app, but it’s not long before everyone’s laughing at failings of Apple maps in iOS6.

“Surely this argument isn’t simply two-sided?” asked one audience member.  In a moment of conciliation the panel agreed that there is a place for ‘wrappers’ such as PhoneGap for iOS and Android or Webworks for BlackBerry. Although, there was a feeling amongst both the panel and the audience that these did offer inconsistency of experience.

“There is never a better time to make your website mobile” came one final call from the audience, explaining that Safari in iOS6 now offers a debugging suite.  But it was not enough to convince this evening’s delegation that HTML5 would win the day.   In a convincing result, native gained at least three quarters of the vote, much to the disappointment of Director, Jo Rabin.

It was clear that underlying this, there still remains a strong desire for the mobile web to work, but in the medium term neither the panel nor the audience could see this materialising. Fine dining was favoured over fast food. I still think that everyone would have been delighted with a big bag of steaming hot chips with plenty of salt and vinegar.  If only Crossrail hadn’t meant the demolition of Dionysius’ Fish Bar just opposite our venue.

Rabin urged delegates to turn this around and help make the mobile web better by joining the Core Mobile Web Platform Community Group at http://coremob.org

You can see other coverage of the event here

And here is a word from our fab event sponsor:  Test your app today on Keynotes’ DeviceAnywhere mobile testing platform for FREE! Get 3 free hours of on over 1000 devices around the world including the UK and the US on all of the major OS’. Also, if you wanted to find out more about our ‘write-once, run anywhere’ HTML5-based automated scripting technology, click here or register for our next webinar covering all of our enterprise testing products for testing and monitoring.
Posted by Julia Shalet at Wednesday, September 26, 2012